Editing Audio in FCPX | How to Use EQ

We have all seen the humongous mixing consoles in the worlds most renowned recording studio’s. I think we would all be lying if we said we didn’t find them at least a little daunting. Millions of buttons and nobs with no labels.. To the right, you will see an image of the FCPX EQ. When broken down, it fundamentally does the same thing as part of one of those huge daunting channel strips. EQ’ing is an integral part of editing audio in FCPX. It can have a lot of different practical applications which I will go on to explain below. 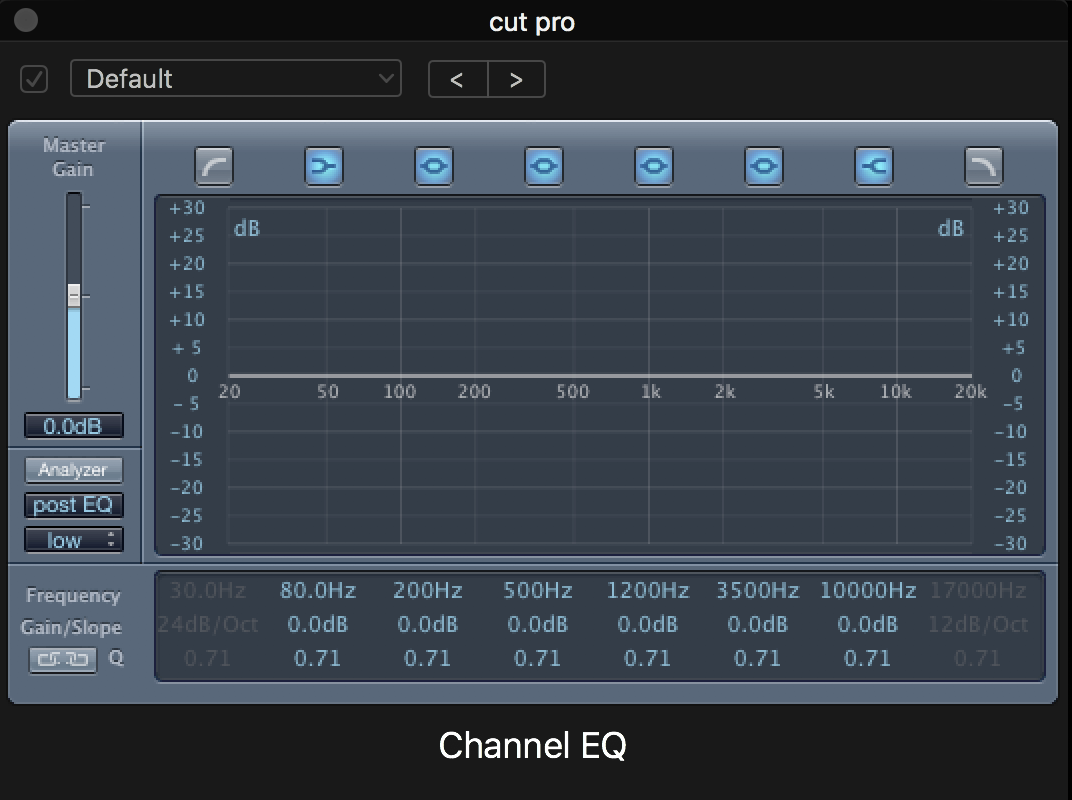 Editing Audio in FCPX | What Can EQ’ing Be Used For

The first and most important thing to remember when recording any audio is getting it right at source. You could be recording on set, or out doors, in a moving vehicle or filming an interview! Depending on the situation, different recording techniques and equipment are required. The better the quality of your recording, the less you will need to do once you begin to edit.

The first, and probably most important use of your EQ is to remove low end rumble or high end hiss. There are often sub frequencies picked up by our mic’s when recording which we can not hear. However, this does not mean that they are not there! When you come to limit your final audio track to add volume, these low frequencies can cause problems and create an overall squashed feel to your audio.

To remove the low end, look for the far left symbol on the EQ, once pressed, you can adjust the frequency by dragging it upwards until the unwanted low end is gone. How far you go with this will depend entirely on what you are trying to achieve. The human hearing range is around 20-20khz, but I wouldn’t recommend moving any higher than 100Hz as you may loose some of the weight in your audio. The method for removing unwanted high end is exactly the same, only in reverse.

Now this part of the EQ’ing the process can often be subjective. Your ears need to become trained to hear when certain frequencies are standing out more than others. The longer you have been editing audio in FCPX, the better you will become at picking them out. These nasty little frequencies are often more apparent in music.

Electric guitar for example can have some harsh high end which would need to be subtly removed. That said, when recording ambience for a scene, or speech outdoors, you may need to remove a frequency from the screech of a passing train for example. Subtlety is key here though guys. Remember, if you are EQ’ing one audio track, the whole source will be affected, so keep this in mind. The best way to do this is to select a band and tighten the Q as far as you can. Following this, sweep through the frequencies until you hear the nasty one you want to remove. Once you have targeted the exact frequency, reduce the gain until the harshness has been removed but the rest of the audio maintains its original sound.

That vocal sound synonymous with radio presenters always seems to have a booming low end. This is a lot to do with the room, the mic’s they use and the compression applied. This sound can be achieved at home and EQ’ing can be a good way to help get you there. Some of the way at least. Your ears are always going to be the greatest tool you have here. But once you have rolled off the low end as explained above, experiment with boosting the low mids and high mids with a medium sized Q until you get the sound you are after. The shape you end up with will often resemble that of a camels humps. Keep in mind though, subtlety is always key. We don’t wan’t our vocals sounding too unnatural.

Remember there are no right or wrong ways to EQ your sound. The best thing you can do is follow your instincts and listen to your ears. EQ’ing is not only used for the clinical and corrective jobs. It can also be used creatively! An example would be to boost a ghastly sound within a horror soundtrack. Keep in mind that all music and audio is subjective, so follow your ears and you can do no wrong!

FCP Audio is the world’s first customisable royalty free music plugin for Final Cut Pro X and the home of the ‘SoundStack’.

We offer a full suite of authentic genre styles of music for the world’s videographers, YouTubers and filmmakers.